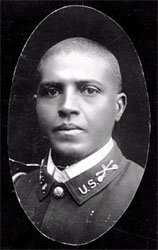 Colonel Charles Young is remembered for his courage and his ability to inspire, and is a widely recognized within the Historically Black Colleges and University community. In 1889, he became the third African-American to graduate from the Military Academy at West Point, despite the hatred, bigotry, and discrimination he encountered throughout his education.

Young excelled as a military officer. His first assignment was in the Spanish-American War. He was later reassigned as Second Lieutenant to training duty at Camp Algers, Virginia.

Young was then awarded a commission as a Major in the Ninth Ohio Volunteer Infantry. Later, during the Spanish American War, he was in command of a squadron of the 10th Cavalry Buffalo Soldiers in Cuba. Young was reassigned to Fort Duchesne in Utah where he successfully arbitrated a dispute between Native Americans and sheep herders, after the war with Spain was over.

Young served as Professor of Military Science at Wilberforce University. He traveled all over the world to do his job, even though he had a family. Young was devoted to his wife Ada and their two children: son, Charles Jr., and daughter Marie. Colonel Charles was the highest ranking African-American officer in the Army when WWI started. He was also the first African-American to reach that rank in the army. On June 22, 1917, Young was retired from the military under protest. In 1922, his funeral was one of the few held at the Memorial Amphitheater at Arlington National Cemetery, where he was buried in Section 3.